Relentlessly Mean To Ourselves

Even the most naturally gifted of athletes & musicians have practiced to strengthen their skills. And they’ve practiced long after an average person would have stopped. These achievers did this early in their careers because a parent or coach was “hard” on them. Eventually those teachings and words became an inner voice, driving them to wake-up, show up on time, and put in the hours it takes to be great.

They were taught to be relentless, eventually becoming relentlessly driven adults.

But I have a theory, driven people are mean to themselves.

A world-class musician will practice the same music over and over countless times even after everyone else would think “that’s good enough.” To an achiever “good enough”, is not good enough. So they continue to practice again and again.

This critical inner voice is developed over the course of years. It drives them to be better, sometimes this inner voice is mean because it’s rarely satisfied. 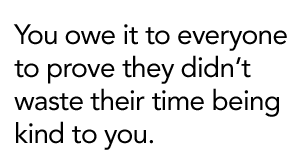 It’s take me 35 years to realize, I am mean to myself. Every night I analyze conversations I had over the course of a day. I think about what I created that day: Code, designs, video, scripts, articles and think, “you can do better tomorrow.”

Some people’s critical inner voice crushes them into analysis paralysis, mine tells me to “go for it” and I should be ashamed if I don’t try. My inner voice tells me, you owe it to the people who have coached, parented, mentored, and love you to do more. You owe it to everyone to prove they didn’t waste their time being kind to you.

I haven’t been able to silent this driving voice, but I have learned to realize when it’s just being mean to me. I’ve learned to give myself permission to take time off, to not answer emails instantly, and to even ignore work sometimes.

If you enjoyed this article, you’ll probably like this one as well.

Receive 4 Steps that will help your business become stronger.