This week my wife, Anna, was cleaning out our home safe and showed me a piece of paper we wrote together in 2003 outlining our goals for the next ten years. 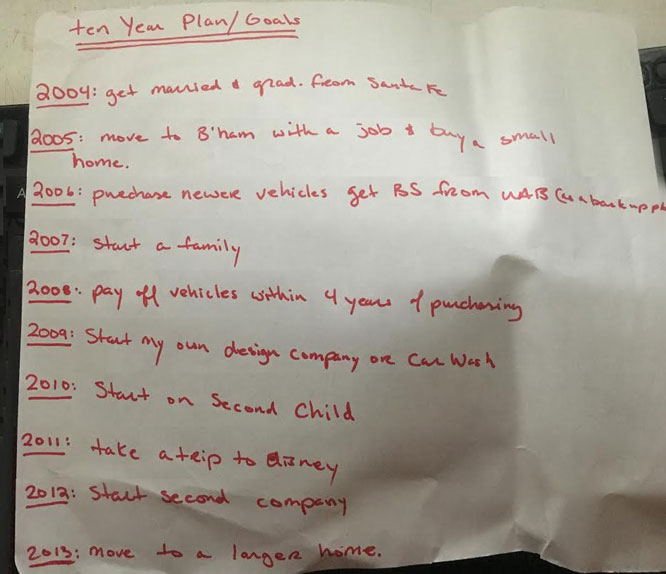 When we wrote these goals we were living together in Gainesville Florida at the time, broke as hell, but focused on the future. I was working at a local car wash for 20 hours a week, taking 18 credit hours at a local college and had a 10 hour a week unpaid internship. Anna was paying most of the household bills as she was an office assistant at a dentist office. We were working our asses off, focused on building a life together.

This piece of paper encapsulated our goals for the future, a hopeful best case scenario of what we thought our lives could be.

Let me start by saying this blog post might seem braggadocious, because it is. I guess I’m proud of what we’ve done, with the help of many others, we’ve worked hard and things have fallen in place for us.

Goal 2004: Get married and graduate from Santa Fe College.
Reality: Yes Anna and I got married in 2003 but I actually never graduated as I found a design job before I graduated. As I approached graduation I realized the degree was fairly worthless for what I wanted to do.

Goal 2005: Move to Birmingham Alabama (Anna’s hometown) with a job and buy a small home.
Reality: I landed a job at a small design company in Birmingham…I got the job on a whim. I used to call design companies who were in the phone book, once on the phone I would tell them I was a design student and asked them about their hiring criteria of junior designers. Impressed with one of these calls, a company asked me to come in and chat, months later we had a formal interview and they offered me a job. Meeting our goal we also bought our first home in Birmingham, this was the height of the real estate boom and it was easy to get a home loan.

Goal 2006: purchase newer vehicles and get B.S. from University of Alabama in Birmingham.
Reality: Purchasing newer vehicles seemed like such a lofty goal at the time. In 2003, Anna and I were bringing home together about $450 per week. Newer vehicles and a small home seemed luxurious. Fun thing is now I could afford any vehicle I want, but I drive an old 1969 chevy truck.

Goal 2007: Start a family.
Reality: I still can’t believe I have kids, but Jimmy is 10 years old now and Sarah will be turning 8 years old in a couple months. Thinking about the 23 years old version of myself, seeing myself as a father, affording the expenses of a kid was scary.

Goal 2008: Pay off vehicles within 4 years of purchasing.
Reality: We really wanted to pay off our car loans sooner than we expected, this would have been the true sign of our family being “successful”. We ended up paying our car loans off in 2008, we haven’t had car loans since then.

Goal 2009: Start my own design company or car wash.
Reality: This happened much sooner than expected, I went freelance in 2005 and co-founded LessEverything in early 2007. I really thought this would have felt like a bigger feat than it was when I did it. FYI my family owns car washes; in 2003 when we wrote the goal I didn’t even know if I could make it as a designer. I didn’t know if I had the skills.

Goal 2012: Start second company.
Reality: I didn’t know what I wanted to start, but I knew I wanted to have multiple types of projects/companies to work on. I love jumping from one company’s problems to another one. Steve and I started LessConf, LessAccounting, LessTimeSpent, LessMoneyWorkshops and LessFilms along the way.

Goals are a time capsule, as life moves your goals change. Things which seemed important in 2003 like “take a trip to Disney” are way less important now. I love making goals, writing down plans but realizing life changes us and what is important to us.

Anna and I have already written down the next 10 years of goals, look for a retrospective blog post on the new goals in 2027 ;)

Get actionable tips on making life as a business owner easier. We've been in business 8 years and we're still learning too!